You are here: Home / Classical Texts / Sharh us-Sunnah of al-Barbahaaree Mail to a Friend • Printer friendly 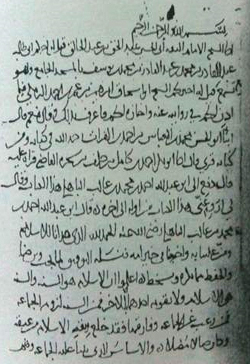 Introduction: "Praise of Allāh and His Favour" | Explanation by the Noble Shaikh, the Scholar, Sālih al-Fawzān

قال البربهاري الحمد لله الذي هدانا للإسلام ومن علينا به وأخرجنا في خير أمة فنسأله التوفيق لما يحب ويرضى والحفظ مما يكره ويسخط
All praise is due to Allāh who guided us to Islām, and He favoured us with it, and He placed us in the best nation - so we ask Him to grant us success to adhere to that which He loves and is pleased with, and to protect us from that which He hates and that which angers Him.

All praise is due to Allah, Lord of the worlds, the Most Merciful, the Bestower of Mercy. Al-Fātihah, 2-3

All praise is due to Allah, who created the heavens and the earth and made the darkness and the light. Al-An‛ām, 1

All praise is due to Allah, Creator of the heavens and the earth. Fātir, 1

If you were say, "I am grateful to so-and-so" or, "I praise so-and-so due to what he has done" with the meaning of specifying something for which you have praised him or thanked him, then in that there is no harm. As for you saying, "Al-hamd (i.e. all praise) is due to so-and-so" then this is not permitted except for Allāh (the Most High).

As for "Allāh", then it is a name from His names, the Most High. It's meaning is "The One Diety (al-Ma'looh), The One Worshipped (al-Ma‛bood)". This is because the meaning of al-Uloohiyyah (i.e. to single out Allāh as the Diety) is al-‛Uboodiyyah (i.e. to single Allāh alone with all worship).

This is name that is not used except for Allāh - no one is to be ever named with this name other than Allāh Himself. Even the tyrants, the obstinate disbelievers and the godless athiests never named themselves "Allāh". The Pharoah never said, "I am Allāh", rather he would say, "I am your Lord the Most High."[2] So this name is specific and only for Allāh (the Most High).

In the term "Lord of the worlds (رَبِّ الْعَالَمِينَ)", the meaning of ar-Rabb (The Lord) is: al-Mālik (the Owner), al-Mutasarrif (the Governing Sovereign). The worlds (الْعَالَمِينَ) is the plural of world (عَالَم) - the worlds here refers to all of creation. Allāh is the Lord of the worlds, He created them and controls them - He is Sole One that is worthy of being worshipped by the creation and the Sole One and True Diety. The saying of the Imām al-Barbahāree (may Allāh's Mercy be upon him): "All praise is due to Allāh who guided us to Islām" Then Islām is the greatest blessing, Allāh (the Most High) stated:

This day I have perfected for you your religion and completed My favour upon you and have approved for you Islam as religion. al-Mā'idah, 3

So with Islām the favour and blessing was completed upon the Muslims - and Allāh (the Most High) states:

Say, "In the bounty of Allah and in His mercy - in that let them rejoice" Yoonus, 58

The bounty of Allāh mentioned here is Islām, and the mercy is the Qur'ān. So let them rejoice with Islām and the Qur'ān.

In this is a recognition for you that bounty belongs to Allāh for you being guided to Islām, and being directed towards it. This is a bounty from Allāh, not due to your strength or your power - rather it is guidance and success that is granted by Allāh (the Most High). He is the One who guided you - and it is for this reason that the people of Paradise will say once they have entered into Paradise on the Day of Resurrection:

"Praise to Allah, who has guided us to this; and we would never have been guided if Allah had not guided us." Al-A‛rāf, 43

Al-Barbahāree stated: "..and He placed us in the best nation.." He took this from the statement of Allāh (the Most High):

You are the best nation raised for mankind. Āli ‛Imrān, 110

The saying of Allāh, "You are.." is addressed to the Muslims. His saying, "..best nation.." meaning the best of all nations. And the intent of the term, Nation (Ummah) is al-Jamā‛ah. In the statement of Allāh (the Most High), "..best nation raised for mankind", scrutinise the words, "..for mankind." So the goodness of this Ummah is not limited to only upon their own individual selves - it does not suffice that a person learns and acts whilst he abandons others, rather he must spread the message, and spread knowledge, and spread the goodness, and call to Allāh, enjoin what is good, forbid what is evil and he becomes an active member of the Muslim Society. So the meaning of His (the Most High) saying, "..raised for mankind" is that they were not merely raised for their own benefit, but raised for mankind in general.

The saying of the Imām al-Barbahāree (may Allāh's Mercy be upon him): "So we ask Him to grant us success to adhere to that which He loves and is pleased with" A person asks Allāh for steadfastness, even if he knows the truth, acts upon it and believes in it. He does not feel safe from being deviated, and from trials that may come, plague him and led him astray from the Path of Allāh (the Most High). For this reason the Prophet (salallaahu 'alaihi wassallam) would say:

"O Turner of the hearts! Keep my heart firm upon your Religion."[3]

And keep me and my sons away from worshipping idols. My Lord, indeed they have led astray many among the people. Ibrāhīm, 35-36

Allāh's Messenger Ibrāhīm (salallaahu 'alaihi wassallam) feared for himself - and it is true that for every strengthening of Īmān in Allāh, a person fears and does not feel secure from being put to trial, and he does not praise himself, or sanctify himself. Rather he asks Allāh for steadfastness, asks Him for a good end to his life, fears a wicked ending. He fears falling into trials and tribulations - he fears deviation, misguidance and the callers to evil.


Link to this article:   Show: HTML Link • Full Link • Short Link
Related Articles:
Add a Comment (comments are currently moderated)
You must be registered and logged in to comment.

Latest Articles
Disbelief of the One Who Denies Sun's Motion Around the Earth
A Brief Biography of Harb bin Ismail al-Kirmani (d. 280H)
Abu Uthman al-Sabuni (d. 449H): The Distinguishing Signs of Ahl al-Bid'ah
Muhammad Hijab, the Falasifah, Mutafalsifah and Jahmiyyah: Laying the Foundations for the Dīn of the Philosophers and Jahmites
Abu Taymiyyah Jeylani's Student and the Principle of Jahm bin Safwaan
The Difference Between Ru'yah, Idraak and Ihaatah with Respect to Seeing Allaah
Shaykh Hamud al-Tuwayjuree on the Claims of Moon Travel and Inhabitation
Big Bang Cosmology and the Quran: A Response to Muslim Apologists Using Scientific Conjectures to Explain the Qur'an
The Permanent Committee of Scholars on Ibn Taymiyyah, Ahl al-Kalām and Tasalsul (Endless Chain of Events)
Shaykh Ibn al-Uthaymin and Ibn Taymiyyah on the Hadiths Relating to the First Creation
Help Reading the Qur'an try this website
Search This Site

Most Popular
The Meaning and Importance of 'Aqidah'
The Khilaafah Lasted for 30 Years Then There Was Kingship Which Allaah Gives To Whomever He Pleases
Muhammad Hijab, the Falasifah, Mutafalsifah and Jahmiyyah: Laying the Foundations for the Dīn of the Philosophers and Jahmites
The Splitting of the Muslim Ummah: Part 1 - The Completion and Perfection of the Religion and The Way of the Companions
Advice Regarding Hamza Tzortzis and Company (iERA): Part 1 - Introduction
Imaam al-Sa'dee: What is the Definition of Tawheed and What Are Its Types?
Want to Understand Aqidah Properly? Then You Must Learn and Understand History!
The Splitting of the Muslim Ummah: Part 3 - An Overview of the Various Deviant Sects and Corrupt Creeds and Methodologies
Abu Taymiyyah Jeylani's Student and the Principle of Jahm bin Safwaan
Translation of the Laamiyyah Poem Ascribed to Ibn Taymiyyah